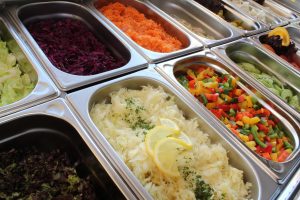 In case you’re wondering, my hubby came through surgery with flying colors! The next day he is up and sitting in a chair. Of  course he is sore, but he is doing very well. And…of course, I am diffusing essential oils in his room to help support his immune system, and his respiratory system.

Now as far as hospital food goes…All I can say is WOW! As a health coach, the first thing I need to say is the food is totally NOT healthy. To the point that my hubby refused to eat his Ice cream, laced with high fructose corn syrup, sugar and artificial flavorings. After surgery, his meal trays consisted of: jello, ice cream, broth, and ginger ale. Okay, I get that he needs to eat a liquid diet until his insides are ready for solids but really? Can we not find anything a little healthier than the sugar laden crap? Then after he could have solids, he was given breaded chicken with gravy, hamburgers, bacon, sausage, okay, it was turkey bacon and sausage, but it still contains unhealthy fats. They gave him so much sugar that his blood sugar readings went so high that they gave him a shot of insulin. MY HUSBAND IS NOT A DIABETIC!!!

I couldn’t wait to get him out of there to feed him foods that would nourish his body.

Now onto the cafeteria. I spent six days at the hospital with my husband. I took my own food most of those days, but there were a couple of days when I went to the hospital cafeteria to eat lunch. Now you would think, being a hospital, and celiac disease being more and more prevalent, I should have been able to find gluten-free food more prevalent than when my mother in law was in the hospital back in 2009. I wrote about that here.

However, that wasn’t the case. If I didn’t have a salad every day, there wasn’t very much of anything that was available to me to eat. We really need to change this!  It is 2017, not 1986 when I was diagnosed! There are a lot of people who are eating gluten-free. You would think that a hospital could/would be able to accommodate this particular dietary requirement! This is NOT a FAD diet! We eat this way because we HAVE to to SURVIVE!

It’s time, that especially hospitals, wake up and offer food to those of us who need to eat this way to live! What if I were a patient and not just the spouse of a patient?