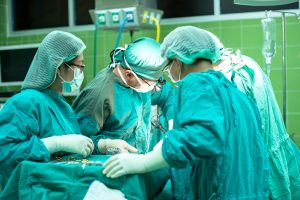 I wrote last week about how busy the month of May was going to be. It’s funny the twists and turns that life can throw your way.

As I write this, I am sitting in the surgical waiting room of Presbyterian Hospital in Pittsburgh, waiting to hear how my husband’s bypass surgery went. Here’s how I came to be sitting here waiting:

I was extremely tired from working Friday and Saturday at the Pamperfest event, so my Mother’s Day was quite uneventful. I spent the day relaxing, outside in the sun, reading, doing homework and just enjoying the day. My hubby was working in the yard mowing the lawn with his John Deere tractor and just puttseying around.

He went to bed fairly early that evening, which isn’t unusual for a Sunday night, because we get up for work at 4:30 a.m.  I woke him up at 9:30 to help me round up our ducklings, whose temporary enclosure had blown over in the sever storm we had earlier in the evening. He seemed off and I asked him if he was okay? He said no, but I thought he was just ticked off at me for waking him up. He went back to bed.

Next morning, I was in the shower and he came in and said “I think I need to go see our PCP”. Of course being the loving wife that I am, I said very sarcastically, “Why?”. That’s when he told me he’s been having chest pain when he exerts himself for the past several months. ARE YOU KIDDING ME?

I watch our daughter’s children in my office, and so after emailing the PCP’s office at 5:30 a.m., my next move was to text my daughter to call me. I knew she would be up, but I also knew that the rest of her family would not be, so I didn’t want to call her.

When she called me I told her that she would need to find alternative childcare for today, and then told her what her dad had told me. Did I mention that our daughter has worked in the cath lab at Presbyterian hospital for 12 years? Twenty minutes later, she called me and said that she had an appointment for him with a cardiologist at 10:00 a.m.

Long story short, the cardiologist said that my hubby had classic symptoms for a blockage and that if he could he would send him straight to the Cath. lab, but insurance deems he must have a stress test and the next appointment was the next morning at 7 a.m. He flunked the stress test and was immediately taken over to the Cath Lab.

His blockage was such that we felt that the best option was surgery. So two days after that fateful Tuesday, here I sit, waiting for news of a, hopefully, successful surgery.

I will let you know…

Right now, everything else is on hold.